Tough Soles is a project by Ellie Berry and Carl Lange to hike all of the National Waymarked Trails in Ireland, a distance of approximately 4000km. They began in early 2017 and have been walking, camping, and making videos and blog posts ever since. The blog is available at toughsoles.ie/blog, and videos at YouTube.com/toughsoles.

Tough Soles Maps are a collection of walking maps for every National Waymarked Trail in Ireland, made available under the CC-BY license, allowing anybody to distribute, remix, tweak, and build upon them, as long as Tough Soles and the data providers, listed at the end of the post, are attributed.

They show the National Waymarked Trails in detail, including landscape height, national monuments, towns, and many other features that might be useful to walkers!

Back around Christmas of 2017, after our first year of walking, I decided I would make a new version of the map that we have on our front page - the one that shows all the trails we've walked, and all the trails we have left. After learning how to make that map, I (Carl) decided it would be cool to make maps for people to use to walk the trails themselves! 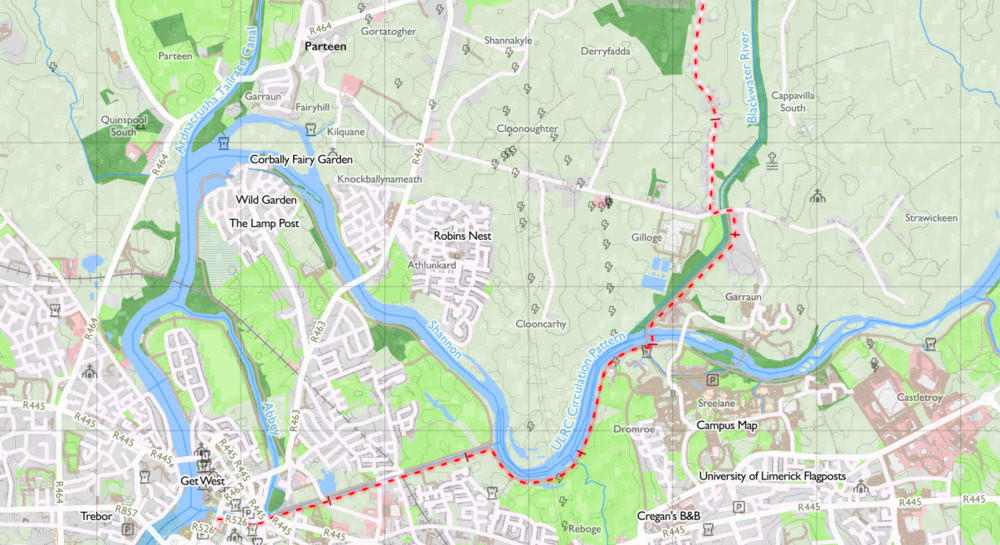 Okay, brace yourself: you're about to be hit with some detail about how things are owned on the internet.

On the internet, things you and I create are thought of as "owned", normally by the original creator. The creator is able to license their creation - so if I create a great video, I can license it so that you can only view it in Ireland. Or you can only view it if you're a horse. (The exhaustive rules about what constitutes a legally binding license are... unexplored.)

To many people, this only really comes up when you think about piracy. If you record the latest episode of Game of Thrones from your TV and send it to a friend who doesn't own one, you are breaking the terms of your license to the show, which only allows you to watch it.

However, it applies to more than just piracy - virtually everything you interact with on the internet is licensed in some way! Every Youtube video, every song, every page on Wikipedia. For example, almost all of our Youtube videos are licensed under the Standard Youtube License, where we grant Youtube "worldwide, non-exclusive, royalty-free, transferable licence (with right to sub-licence) to use, reproduce, distribute, prepare derivative works of, display, and perform that Content" - and to every user of Youtube, "a worldwide, non-exclusive, royalty-free licence to access your Content". Or in the case of Instagram (brace yourselves, Instagram account holders), we grant "a non-exclusive, royalty-free, transferable, sub-licensable, worldwide license to host, use, distribute, modify, run, copy, publicly perform or display, translate, and create derivative works of your content". Instagram helpfully states that they don't claim ownership of our content, and that we can revoke this license simply by deleting the image or our account. Thanks, Instagram! This means that by uploading a photo to Instagram, we allow Instagram to sub-license that photo to any other person and have them sell it, or put it on billboards or use it in an election campaign - except, of course, if we delete it from Instagram. 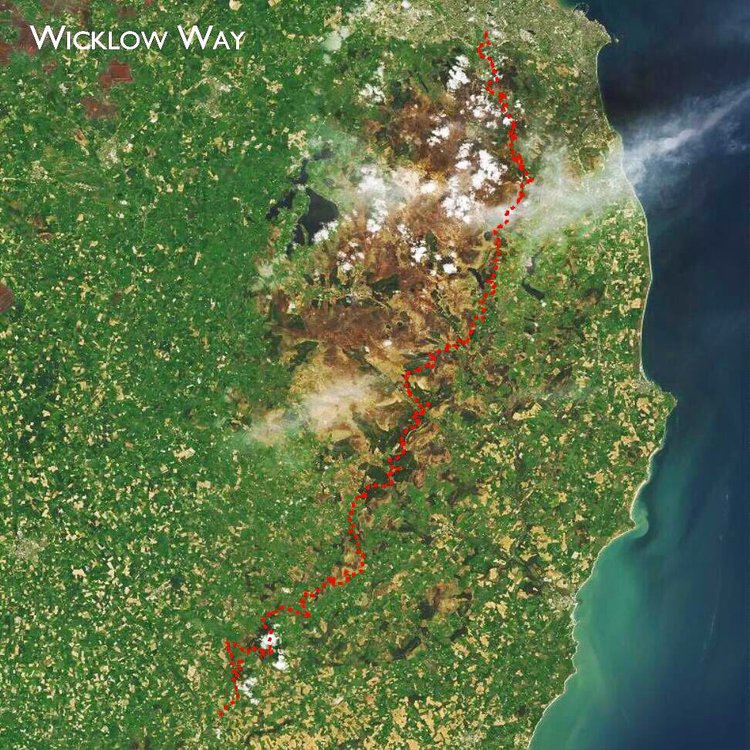 Tough Soles - Aerial Map of the Wicklow Way. Take a break from making one kind of map by learning how to make another!

Another good example is Wikipedia. If I write an article on Wikipedia, I allow that article to be licensed by Wikipedia under the Creative Commons Attribution-Sharealike (CC-BY-SA) license. This license means that if I copy and paste a part of the article into a blog post, I must attribute Wikipedia, and also license that blog post under the same CC-BY-SA license. (In all of these cases, the concept of "fair use" may apply depending on your jurisdiction - for instance, if I copy and paste a three-word phrase from Wikipedia, it might be nonsense to be bound by that license. This topic has infinite depth and nuance.)

Anyway, let's bring this back to maps. Free maps already exist for most of the trails, made by EastWest Mapping for Sport Ireland. These are available for anybody to use on irishtrails.ie, and they are a fantastic resource without which we could not have done Tough Soles. However, these maps are built using Ordnance Survey Ireland data, and the license attached to that data disallows reproduction without permission. This "reproduction" might mean displaying these maps in Youtube videos, Instagram posts, or blog posts. Naturally, that conflicts a little with what we might like to do with them.

Of course, we could have asked for permission to reproduce them, but I have a tendency to overcomplicate things for myself, so instead I just said "how hard can it be to make our own?” Then, I spent over a year learning exactly how hard it can be.

I wanted to create some maps that anybody could use, for anything they wanted, and so I decided to put them under the extremely permissive Creative Commons Attribution (CC-BY) license. Our maps are comprised entirely of data under the CC-BY license - and so, we can distribute our maps under that license too!

Specifically, releasing the maps under the CC-BY license means that you can distribute, remix, tweak, and build upon them, even commercially, as long as you credit us and the data providers, listed at the end of this post.

To summarise: I made these maps because I like a challenge, because I thought I could, and because I wanted to make maps that are openly licensed, in approximately equal measure. 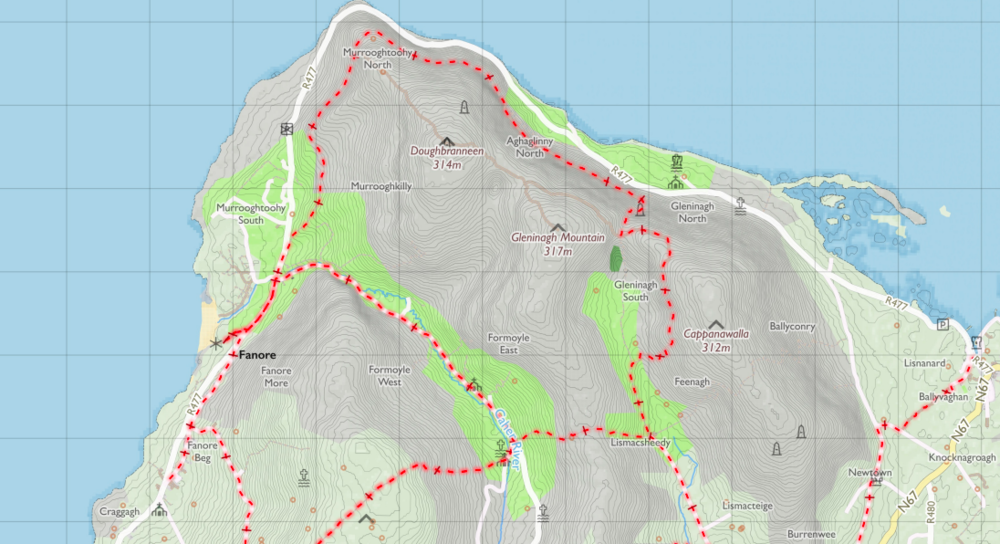 How they are made

I used data that is freely available on data.gov.ie, Ireland's National Open Data Portal, as well as data from OpenStreetMaps, to create these maps using software called QGIS.

I loaded Ireland's OpenStreetMaps data into a local postgis instance, as well as townlands, national monuments, elevation data, and crucially, the trails data. This is a step I'm often likely to forget about, since it happens very early in a mapping project, but in fact it requires a lot of in-depth knowledge and often a lot of computing resources.

From there, it was an extremely long process of styling the data within QGIS to make a usable walking map, solving a lot of small issues along the way. Essentially, mapmaking is data visualisation, and the biggest question is always "how do I represent this data in such a way that it is useful but not overwhelming", and many years of experience in the dataviz field helped me in this regard. It still took forever.

The process of actually generating individual maps from each trail was surprisingly arduous and required some in-the-weeds programming. The biggest issue I faced here was the generation of "coverage" maps - that is, rectangles that inform the program which parts of the trail should be on which page of the map. Without going into too much detail I eventually solved this by clustering the points that make up each trail into 3, 4, 5,... clusters, up to 30, putting rectangles around each cluster, and then choosing the set of clusters where the resulting rectangles have an average of close to 25 kilometres squared. It was a relatively brute-force approach, but it did come up with reasonable results. The important thing was that I had a starting point for each trail, which I could manually edit in the future.

Throughout the project, I focused on automation. I knew that with 42 (and growing) National Waymarked Trails, I would not want to make a single styling change and then have to manually re-export every map by hand. I knew that I wouldn't want to manually generate coverage maps for each trail, and that if I had to, I would completely bail on the project. If I need to repeat something more than a few times, I have an uncontrollable urge to make the computer do it for me instead (even if programming the task might take ten times longer than simply doing the thing by hand). So, I automated generation of coverage maps, export of each trail, and keeping the underlying data up-to-date. The only thing that I now do by hand is the styling of the maps, which is the only creative part of the endeavour anyway. This automation lets me iterate faster, which leads to better maps, which (hopefully) leads to more people enjoying the outdoors. 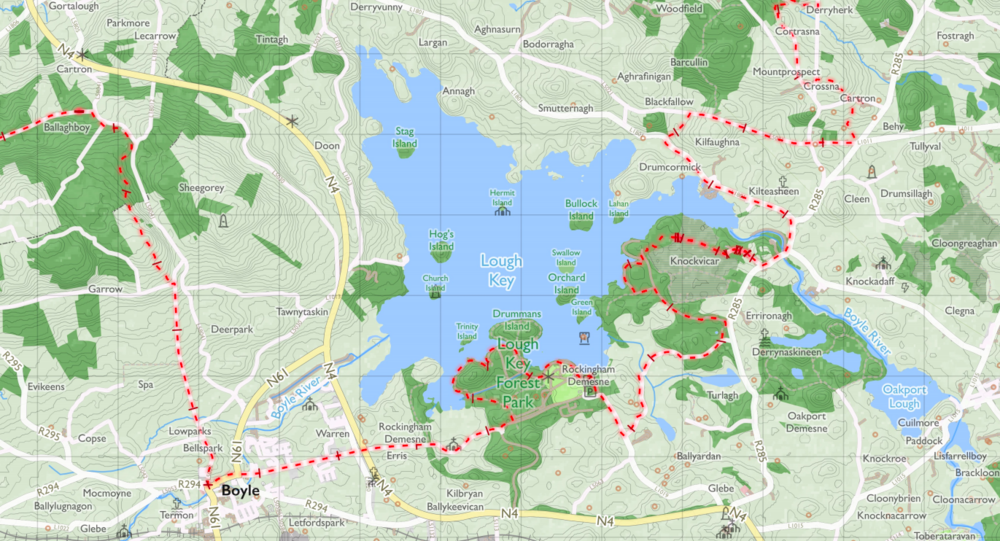 Now, if you read the detailed explanation of licensing, you'll know that I need to attribute the people who own the license for the data I built the maps on! Here are those attributions.

The maps were made with QGIS, an open source mapping application, which is licensed under the General Public License.

On data.gov.ie, the specific datasets I used were:

How to get the maps

The Tough Soles trail maps are, and will always be, freely available under the Creative Commons Attribution License. You can find a listing of these maps at toughsoles.ie/maps, and here’s the video we made discussing them! 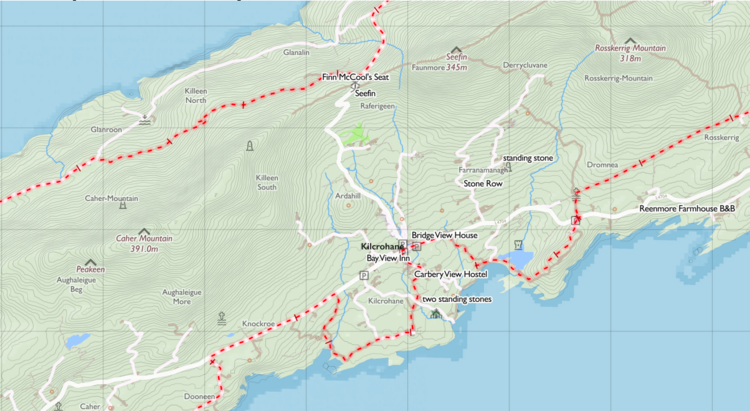