Our next Open Data Strategy

Open Data Training is restarting in …

Often standard of living is emphasised over quality of life, in part due to the fact that it is easier to measure, whereas quality of life gives the better measure of the success of society. With the resolution of the quality of life measures based at a community level, a better understanding of what initiatives and environment are working to improve people's lives can be understood.

This project uses data from the open data portal (data.gov.ie) to put quality of life scores on a locational basis in Ireland. To make the data comparable to other measures, the public formula from Numbeo was used. The input data to Numbeo’s database is generally subjective survey, whereas a goal of this study was to use objective measures so it could be rerun and see the effect of changes. To achieve this goal it was first necessary to create a mapping between the measures of Numbeo and the data available on the open data portal (https://data.gov.ie).

The formula used by numbeo (https://www.numbeo.com) is defined as follows:

Which shows a weighted summation of a several factors that influence the quality of life:

The data preparation phase was the largest part of the exercise. To find the data that best matched the measured needed, extract them to a common format and harmonise them across all datasets. The most common geographical unit that was available was county level, so this was used as the main variable. Data for some of the factors could only be found at a state level, where this was the case the same value was used for every county.

The following mapping and process was used for each required data variable.

With this data in place we wrote a script that generates the QualityOfLifeIndex for each county in Ireland with a similar formula to Numbeo. In our case:

The generated results are shown on the following map: 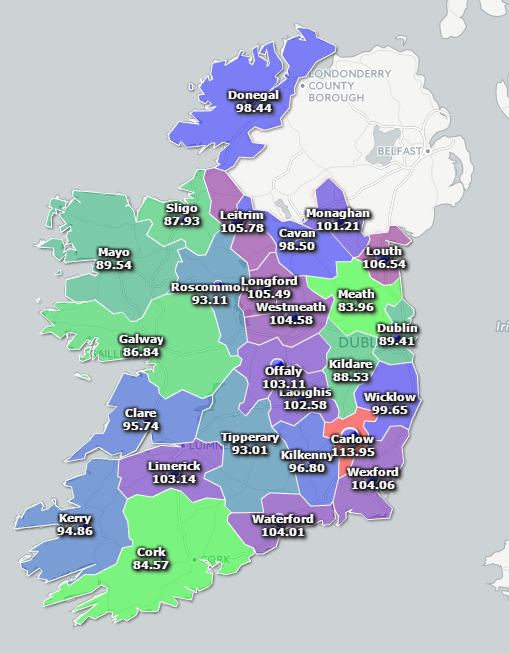 It is hard to make direct comparisons between the individual objective county measures and the subjective international scores on Numbeo as one person’s rating for “good” weather may be very different to another's. But these objective measures do give a good basis for calculating or seeing the temporal change in scores over time, they also serve as a good basis for inter county comparisons.

The lowest scores are in Meath, which scored poorly for the safety index and also has one of the worst traffic Time Index, which may be related to having a large population that commute to Dublin for work.

Following the open data idea, the code used for this application is also free for download for consultation and/or modification. The repository is here:

Also we create an interactive map everybody can consult here: