Assistance for Public Bodies on the …

New study on the economic impact of …

Great turnout at the Cork IT Open Data Hackathon

CIT's Open Data Hackathon took place on Saturday 18 May in the Melbourne building in CIT. It was a great day that saw innovative ideas from shortening HSE waiting lists to increasing awareness of our environmental impact! In total, 25 contestants took part, five one minute verbal pitches were given @ 09:00 resulting in five teams being formed and solid ideas being produced and presented @ 18:30.

A little info on the problems being addressed and what the teams worked on:

1st Place - Speedy Appointers – This team worked on a solution for HSE waiting lists. Pulling publicly available data, the team were able to identify waiting times per speciality. After that, an approximate metric was generated, enabling hospitals performance to be ranked comparatively. A heatmap of Ireland with the location of hospitals (per speciality) was developed. This heatmap is a simple but powerful visual aid for both GPs and prospective patients as it provides actionable information in a readily understandable manner.

2nd Place - Airfix - This team worked on a solution for raising awareness concerning the impact that private transport has on air quality. Using air quality and environmental data from CIT & the National Data portal, along with data indicative of increased transport activity – a baseline correlation was derived. This model can then be used to encourage your environmental conscientiousness. Think of it as a step counter that tells you how each step improves the air quality in your locale!

3rd Place - Charity Coffee – This team worked on an application that enables coffee lovers to donate money to charity when buying a cup. The application scanned a QR code, provided by the Café, that set two amounts (a discount on the price as an incentive and the quantity to donate). After that, a list of registered charities was pulled from the National Registry, also geo-IP was used to id your location and prioritise local charities first.

Energy Stats – This team used Time Series Forecasting to try and optimise the use of hydroelectric power as a means to reduce our reliance on fossil fuel consumption. They investigated the production capacity and regenerative capacity of a hydroelectric plant based on rainfall and weather data. The intent was to enable greater/lesser use of hydro such that the spinning up/down of fossil fuel plants could be delayed during peak demand.

Rent Checkers – This team reviewed a broad range of CSO data, from crime to economic, before settling on the rental sector in Ireland. They investigated the generation of a registry that would enable current rents to be recorded by tenants and landlords such that unfair increases can be avoided. Furthermore, this enables real-time stats to be generated and visualised.

The following is just one of the great photo shots taken by our photographer on the day, Tobechukwu Njoku. 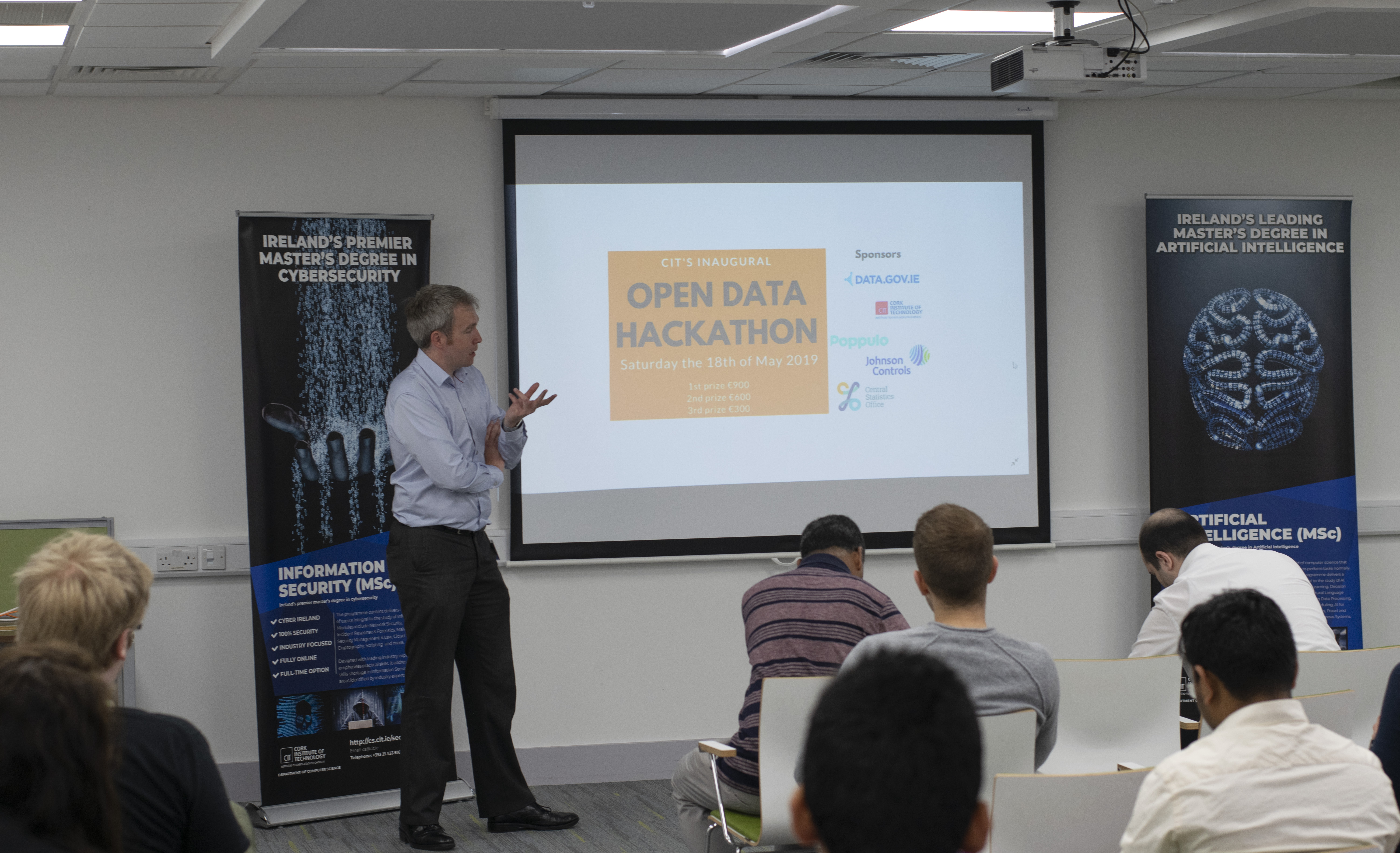 The event saw a significant number of individuals from industry participating on the day with representatives from KPMG, Deloitte, Clearstream, Trend Micro, Johnson Controls, McAfee, the CSO, Pilz, Popullo, UCC, CIT and SFI.

The Hackathon set out to highlight the benefits to be realised from applying Data Analytics (DA) and Artificial Intelligence (AI) techniques to data sourced from the national Open Data portal (data.gov.ie). To this end it was a great success, it highlighted a range of relevant programmes on offer in CIT, demonstrated the depth of expertise available within the institution and is a promising event to be built upon moving forward.